It's hard to put Rue Protzer in a single drawer. He works as a guitarist, bandleader, composer, producer, writer and songwriter. "Music knows no boundaries. Whether it's a simple pop song or a complex instrumental work, there are many ways to create good music. It's exciting for me to always go for new musical ways. "

Born in Stuttgart, Rue Protzer gets in contact with music very early: "My parents listened to Louis Armstrong, Oscar Peterson and Stan Getz, but also Mozart, Beethoven and Bach. Somehow, music always ran with us. "

He gets his first guitar lessons at the age of nine and wins his first composing competition at 15. During this time, he gained experience in various bands in the funk / rock area.

The recording at the Conservatory (today’s University of Music) in Nuremberg follows this. There he studies both major subject classical guitar as well as major subject composition simultaneously.

After completing his studies in public examinations, he mainly works as a studio musician in the field of pop music / advertising and has appeared on numerous national and international publications (including Dollhouse, Funk You, Fancy, Peggy March, Denise, Chris Wolf ...).

Gradually, jazz and thus improvisation become the center of his work. He takes private lessons and attends workshops in New York and London while he deepens his knowledge of jazz and improvisation among others with Pat Metheny, Joe Beck and Gene Bertoncini.

Three albums known by the name Rue de Paris follow this. Tours, concerts and radio recordings accompany the international project. With Adam Nussbaum, John Goldsby and Ack van Rooyen he wins jazz greats for the debut "album" Quiet Motion "and signs an exclusive contract with the label SONY Classical. Critics celebrate the album released in 2005 as a masterpiece.

The second ‘Rue de Paris' album is produced by Rue Protzer 2007 in New York. The recordings take place in the famous Avatar Studios. The album is titled "New York Slow" and includes five original compositions as well as arrangements of pieces by Steve Swallow, Keith Jarrett and John Coltrane. With the "Who's Who" of the American jazz scene: Randy Brecker, Lee Konitz, Jay Anderson, and Adam Nussbaum.

The third album "Trois" was recorded in 2009 in The Hague. The album features Marc Johnson, Adam Nussbaum, Thomas Rückert, Julian Wasserfuhr and Cecile Verny. The renowned specialist magazine Stereoplay chooses "Trois" in third place of the ten best jazz CDs of the year.

As bandleader, Rue Protzer leads the Band 4 at the club. The live band is one of the most booked bands in Germany and performs at top-class events all over Europe.

In the following years, he created the compositions "Xanivia" and "The Pirt Trip" for orchestra, which Rue Protzer premieres with the Metropolorchester in Nuremberg.

In 2013, "One Note Story" is the first album under his own name. At the recordings in Munich Patrick Scales, Sebastian Studnitzky, Jesse Milliner, Christian Lettner and Lutz Häfner act as musicians.

With "Jimmy! The Guitar Boss" Rue Protzer develops a series of e-guitar textbooks for children. Edition Dux has published three volumes of the series in 2017.

A new project is currently in preparation: "It will be something new and different again", Rue Protzer reveals as a teaser. 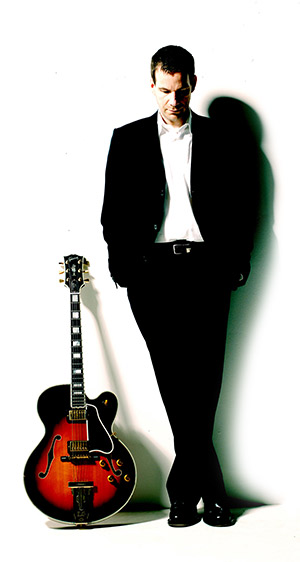